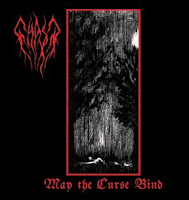 I'm always impressed with bands that manage to take an established sound like black metal, flay it to its bare roots and conjure an album of unspeakable evil and hostility. UK 3-piece Ghast have managed to do just this on their debut, with five great tracks of sludge mired black metal which occasionally lapse into powerful doom.

The guitars and bass are thickly mixed, giving the album a feeling of murk and sludge which complement the tortured vocals. The album opens with the ungodly warning of "Crawl, Blighted and Afraid" which should be the response of any sane individual upon first hearing this album. I am not such a sane individual, but I admit the thought at least crossed my mind, especially when the blasting died down into a thick wall of doom syrup. "Give Your Wrists" starts out slow, moving along at a truly doomed gait but accented with some very creepy speed picking guitars. A superb and devastating track. "Evoke Spiritless Hell" is once again fast, with a venomous vibe akin to early Mayhem, that sort of punk-fueled black riffing with a death metal influence. Yet, the song is highly atmospheric and solemn. "Pale Robe" is a crawling crusher weighted down in an unhealthy level of despair. In other words, beautiful. "Hexed Under Moon" closes the album with a twilit miasma of rushing black metal discord, like a knife shining under a killing moon. It then proceeds to break into the most amazing riffing on the album, a twisting hybrid of sludge bass and vile black metal riffing.

The sound here is phenomenal. Simple and raw but possessing a depth rarely heard for this style. It is the sound of waves of despair lapping at a cold shore of misanthropy. Yet as disturbing and grim as this album is, it's actually kind of catchy. Simply stated it's one of the best black AND doom metal debuts I've heard all year, and I am looking forward to a great many more.