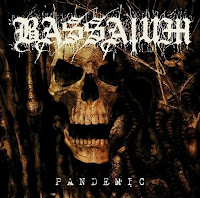 God damn, where did this come from? And why have I never heard them before? Bassaium is a Japanese band playing filthy and punishing Germanic/Canadian thrash/speed metal reminiscent of mid-period Kreator and even Razor! The vocals are brutal and bloodcurdling, they truly turn up the intensity a notch. An exciting effort here, their second album.

"So Weak" begins the slugfest with a thrashing instrumental intro ala something off Violent Restitution by Razor, then the song turns into a violent, beer swilling serial killer spree. "Give Us Your Grade" will appease any fan of early Slaughter and Sacrifice. Sick. "Fester Physical" begins with a riffing onslaught which would not sound out of place on Coma of Souls. The payoff never ends here, as you are treated to beating after beating. "The Body is Slave" and "Evil Enter the Sky" shred. And if it's more Slayer inspired, evil and slower thrash ala South of Heaven you crave, "Demons" should fill that niche.

When a band pays this much attention to what its influences did right, that's a pretty good sign they are going to kick ass. Bassaium isn't coming up with anything original here, but for what it is, it excels. A clobbering and not insignificant tribute to the violent thrash of yesteryear which opens up many doors for aggressive music. You can rank them alongside Ritual Carnage as some of the best pure thrash Japan has to offer.