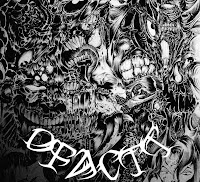 This is a pretty unusual and catchy album from a new French death metal outfit. The style is a mix of very simple, guttural death with creepy atmospheric synthesizers. The result is both vulgar and alluring, and it really stands out.

The guitars use a simple old school death metal sound, much akin to early Deicide or other Florida bands. While this involves a lot of chugging and they might be so exciting isolated, they do conjure some evil vibes under the extremely guttural vocalist. But these alone would still be nothing without the use of the keyboards, which elevates the entire package to a new level. Tracks like "XAM II" and "OCIN" are rather good. I'd want to say this reminded me of early Nocturnus but not exactly, the vocals and the way the guitars come across are a little different.

This is essentially a demo, so don't expect too much in the sound department. Nevertheless, it has sufficient production enough to feel like a bludgeon to the head. This is yet another band you should watch out for in the blossoming French death metal scene, though they don't have much in common with the others. You can listen to the entire demo at their MySpace site, which I've linked below.