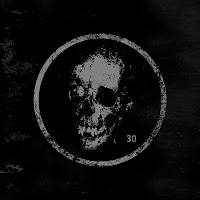 Ah, grindcore. You have such single-minded passion, always blazing by on your frantic journey. More than any other metal genre, you specialize in an absolute bereavement from analytical substance, reveling rather in your wild, uncontrolled rage. Is it for me? No, it really just isn't. But that doesn't mean I can't tell the difference between bands that do the grind well and those that are covering up their insubstantial songwriting skills.

I would have to put Poland's Exit Wounds at the low end of the former category. Their songs are ultimately forgettable (you know these riffs, I guarantee) and there is nothing about their self-titled album that will stick with you once it has passed, yet their sound is so well crafted, it's hard not to like them. Their singer howls raggedly through the churning deluge of guitars, channeling moreso the youthful vehemence of skram than the typical grind bellowing. The guitars have a nice thick grit to them, while the drums are nicely mixed in. There's an overall great, crusty feel to the album that really helps the sound. In fact, this is exactly what I'd expect Skitsystem to sound like if they did grindcore.

But, despite all of the things they get right, Exit Wounds are still only slightly more descript than the teeming horde of me-too grindcore bands out there. I could imagine that grindcore die-hards will get a good kick out of this, but here's hoping to more involving output from these blokes in the future.

http://www.myspace.com/exitwoundsgrindcore
Posted by is this your life? at 6:29 AM