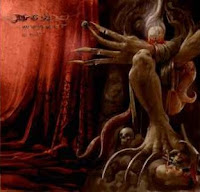 The Polish death metal scene continues to proliferate with many new bands arising in the shadows of the greats. Crawling Death is not exactly a new band, they've been around for some time, but New Murder Art is their first full-length release. The band plays a brutal and dynamic style of death, not always technical, but judging from some of the crazier riffs on the later half of the album, they could probably adapt that strategy if they desired.

What manifests here is a lot of chugging, some groove, interspersed with some old school grinding, evil death metal riffs. The vocals are meaty enough to appeal to fans of Vader, Trauma and other great Polish death metal acts. The mix of the album compliments the lower end guitar chords yet allows for the leads to come through clearly. On to the songs, there are a few I liked and a few I could live without. I thought "I Carry the Dead" was the best of the lot with its barbaric groove trade-off with some pure death metal riffing. Some of the more technical tunes like "Salvation Through Rope" and "Vox in Rama" were decent. As for the rest, the songs sound good but just don't have enough aggression or memorable riffing.

I doubt Crawling Death is going to break into the top tiers of Polish death metal with this debut, but it's a solid foundation from which to build. This isn't at all 'bad'. The album sounds good and they're talented enough musically, I think they will write better songs than these.