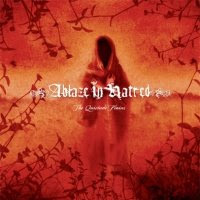 Oh, to evoke beautiful despair...it's not the easiest thing to do for a metal band, but Finland's Ablaze in Hatred is one that certainly can. Slow, churning, and graceful, their sophomore album consists of seven sorrowful tracks. Boasting members of Searing Meadow and Fall of the Leafe, they are no strangers to the use of the somber melody, and here The Quietude Plains excels.

It's not long before the album finds its pace. "A Walk Through the Silence" is a beautiful track to open the album, setting a framework of Mika Ikonen's rueful growling, the layers of light keyboard which conjure grace behind the rhythms guitar. There are also subtle female vocals here but they serve as more of an ethereal accompaniment than some gimpy fairy metal garbage. The end of the song is dense and atmospheric to set up "Perfection of Waves", super slow and sad and wonderful. "The Wandering Path" is another very slow, and bluesy bit of gothic, melodic doom. Other reapers of despair include "My Dearest End" and "Beyond the Trails of Torment". If you're all in for this style, there really isn't a weak moment on the entire record.

Fans of melodic yet crushing doom such as Shape of Despair, Isole, October Tide, earlier Amorphis, and earlier Paradise Lost will find much to love here. I was thoroughly engrossed for the entire playtime. Each track I could close my eyes and conjure some nostalgic scene of depression or beauty and I think you will too. Highly recommended.