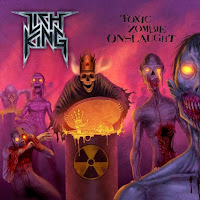 So, this is a very retro band hailing from Amherst, Massachusetts, where I went to university. The flavor here is very Bay Area/80s thrash with a twist of Germanic speed metal. The band uses names for themselves like Darth Vader, Hulk Hogan, etc which I suppose would be funny...except that it's NOT funny, at all, and leads me to believe this is the product of irony, perhaps from some binge drinking brainstorm, but for all I know they could be sXe kids.

Fortunately, they have listened to the style and they play it pretty well. None of the riffs are very good, but they are pretty accurate to their source, with a bleeding, razor edge much like Exodus or Vio-Lence. The vocals of 'A Fucking Tyrannosaur' are pretty pissed off and they spit with accurate thrash venom, but the lyrics to this album are god fucking awful, dumb attempts at making a parody of thrash or metal in general as if it were only supposed to appeal to trailer park inhabitants or something, or ironic college students?

As harsh as I might seem, I respect that people are loving the old thrash days and in person I'd probably buy these guys a drink. This isn't a 'bad' album musically, they do some good leads and some energetic Bay Area thrash riffing. That goofy street side of thrash metal which was pioneered by bands like Anthrax or D.R.I. and now manifests in guys like Municipal Waste has never really appealed to me, I don't find it all that funny unless maybe Tankard is doing it. If, say, Lich King (haw haw) had taken this very same album full of music, and the same vocalist, and wrote some more straight forward angry thrash lyrics that weren't so tongue in cheek, I'd probably like it more. As it stands, I wasn't entertained at all.