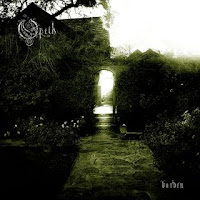 I enjoyed the latest Opeth album Watershed quite a lot, it was no Blackwater Park but at least it was better than those last few. This is a single with a radio edit of "Burden" from Watershed. It also includes the limited edition bonus track from that album, "Mellotron Heart" which is a moody synth piece with Akerfeldt doing his clean vocal thing. It does get kind of interesting as it builds up but I can understand why this would not be featured prominently on an album.

The third track here is a cover of "Would" by Alice in Chains, and really the only draw to this single as the original is quite a good song and I wanted to hear what Opeth would do with it. Well, it sounds like you expect it would, very close to the original but with a few of those Opeth 'flourishes' to it. But it's not worth buying this single for, and there is absolutely no other value here since you've already got "Burden" and most of you fans probably already have "Mellotron Heart". To sum it up: another shitty single.