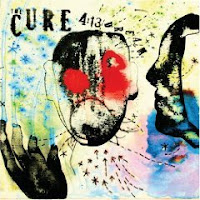 So a new Cure album arrived with little fanfare and I practically missed it, especially after that sub-par self-titled previous effort. Well, I am happy to say it would have been a mistake, because 4:13 Dream is the best material from this band in damned near 20 years, yeah, since Disintegration. It's not that many of the albums since haven't had their moments, they just haven't had nearly enough of them, not from a band that put out Japanese Whispers or Kiss Me, Kiss Me, Kiss Me.

This is a dense, atmospheric album which took me nearly by surprise, and not just in the first listen, but with each successive spin. "Underneath the Stars" is a dreamy, swirling song, you'll hardly notice there are more effects on Smith's vocals near the climax simply because they work so well. "Only One" is the classic pop-inflected Cure track ala "Just Like Heaven" or "Friday I'm in Love". "Reasons Why" is a somber and moody tune, wonderful and it sets up the hook and groove stage of "Freakshow" quite well, one of the best tracks here. Other highlights include THE REST OF THE FUCKING ALBUM, but in particular I loved the dirty blues of "Real Snow White", the melodic and sad climate of "Hungry Ghost", and the proto gothic funk of "Sleep When I'm Dead", which totally belongs on one of their old albums.

But in the end, I was not bored for a single moment on this album. It's the stuff of 80s dreaming, when 'goth' was scintillating catchy gothic rock. The Cure were the masters of this, and judging from what I hear on this disc, they may STILL be. Unbridled excellence in sound.

ooh, thanks for mentioning this, I decided to ignore it after I saw that goofy promo picture of them. Figured they'd just be cashing in on their fame.