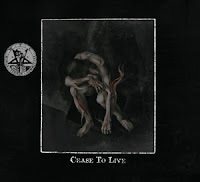 Cease to Live is the 2nd full-length from German's Luror, a project of Unhold who is also in Wolfsmond and Absurd. I have only a vague recollection of the previous album, but this is a competent effort with some melody and replay value, even if it lacks in the originality department.

Cease to Live is primarily performed in the mid to fast paced area where the driving melodies of the guitars are unceasing and the drums careen along at a steady blast. This does create an air of repetition, but fortunately the songs are engrossing enough that this doesn't detract much from the experience. "Through Cruelty to Illumination" begins the album with a vile energy, and it's one of the better tracks. I also favored the somber title track "Cease to Live", the melodic leads of "A Symptom of Evil" and the paint peeling "Boundaries of Evil" with another glorious break. In all the songs are consistent and charging.

The mix of the album is reasonable, the drums and bass are audible and sufficient behind the shimmering walls of guitars and the vocals have a vicious and painful inflection suitable to this style. There isn't anything original about the album, it's a safe bet that if you enjoy German (or Swedish) black metal which is in touch with its primal roots but not shy about using melody as a force, you will probably like this.