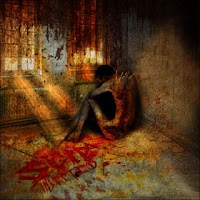 Unmatched Brutality has found itself quite a gem here from this German duo on their debut. Mixing the guttural vocals akin to what you might find in the brutal USDM scene with simpler, catchy and grinding guitars reminiscent of melodic Swedish death metal from its very early days of inception, unrelenting blast beats and gore soaked fury, SCID rarely lets up here, and even when they do, it's pretty damn good.

"Born to Devour" blazes forth after a brief intro, into a labyrinth of winding, melodic and dark old school European death metal riffing. "Purulent Bloodline" starts with a chug off to a blast beat, then busts into a killer Carcass style riff. "Solitary State" starts off with some melody, before unleashing its mid paced destruction. "Exit: Hate" operates on some wild chord progressions. "Who is to Blame" is once again very catchy with its melodic yet menacing riffs. They also cover Rage Against the Machine's "Killing in the Name" but have renamed it "Drilling in the Brain". A bizarre selection, truly, and while it may evoke a laugh or two it's not as fun as their originals. Fortunately, there are more of these, like "Voracious" and the slower "Final Redemption" to close off the album.

The guitars, drums and vocals sound great, though I wish the bass could have a bit more of a presence, but at least it's there. This is a promising debut album from a band that can take 'melodic', quality death metal riffing and actually keep the atmosphere tense and brutal. You won't find your typical annoying chug-chug-blast formula on this album, though they are capable of doing so they choose to actually write energetic and memorable riffs and I for one appreciate this approach. The cover song is pretty weak, but don't let it stop you from enjoying the rest!