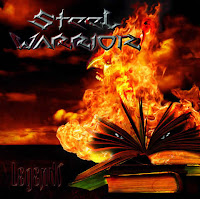 You can probably guess exactly what this sounds like from the band's name and album title. Though I feared the worst, this actually isn't all that bad. It's a couple guys in Brazil doing what they love, a pure worship of 80s classic heavy and speed metal with a few bits that might appeal to the fans of the modern European anthem power metal.

The vocals of Andre Fabian are not unlike those of Dio combined with Peavy from Rage. Unfortunately they aren't the strongest part of the album, they can tend to grate on my nerves. To be fair, there are tracks where they aren't so bad, especially when hitting their lower, grittier register. It's a shame because a lot of the riffs really rock, and these guys perform some good leads and are decent at writing songs. "The Witch and the Cross", "Warlord Spirit" and "Vodu" are all pretty good musically, the rest aren't shabby either.

The album is nice and clear, they did a good job in the recording and all the leads really shine. One could call their style 'glorious' and uplifting, and this is their third full-length to date. If the vocals were a little more consistent, this would be a decent melodic speed/power metal album, but as it stands its little more than average.