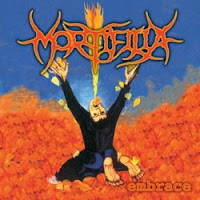 This is the sophomore effort from a Czech death metal band. They've got a melodic approach to their writing which reminds me of the heavier side of Swedish melodeath, ala At the Gates or other earlier stuff. The growled vocals do give a certain character to the album, and there enough decent riffs to make it a pleasant listen once.

"Arrival of Messiah" starts with one of those churning melodic sequences which capture the glory of bands like a Dimension Zero or old Dark Tranquillity. Occasionally the band will tip a little further more into the 'death' side of death metal, and I think they do a good job of this, as in "Curces Century" which has some pretty sweet old school riffing. But the majority of the tracks stick to the lighter fare, and not many stand out. A few exceptions though, I enjoyed "Downfall Up", the uplifting "Storm Slaying Misery Fear", and the pure Scandinavian melodeath of the title track "Embrace (in Cruel Arms)".

Unlike many similar bands, Mortifilia hasn't gone with some overproduced mix with the clean emotional vocals. No metalcore breakdowns to be found on this. The vox are strictly death metal, and the tones of the album are modest and speak for themselves. It's not an album I'm going to revisit often, but a worthy enough effort if you like earlier melodic death metal.