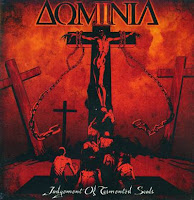 Dominia are a Russian band performing a symphonic hybrid of black and death metal with a lot of melody and grace to it. This is their second full-length album, and while I didn't find it to be ultimately memorable, I commend the band for such a great sound. This isn't a style done quite as often as one would think, and Dominia at least carry it very well.

After a classic piano "Prelude", the band blazes forth with the crunching thrash riff of "Judgement", adorning it with violins and keyboards for quite a nice mix. The vocals are usually snarls but there are occasionally clean verses and chorus. I didn't find a great many of the tracks to be catchy, it seems the orchestration sounds so good that the guitars can feel lacking. Highlights of the album include "Harvester" and the glorious "Exodus".

I should point again out that the album really glows in the sound department...I've rarely heard such a good mix of orchestration in metal, and the violins sound great. In fact, everything does, from the various vocals to the core metal instruments. This sound will surely appeal to fans of the more orchestral Dimmu Borgir albums, and perhaps bands like Therion. I just didn't end up fawning over many of the songs, there were some good leads and of course the violins, pianos and keys but I'd like a little more in the way of memorable guitar riffs. The lyrics seem to revolve around thoughtful religious (or perhaps sacrilegious) themes.

It's clear this band puts a lot of work into their music, and they sound great doing it. They've got all the weapons to become a raving success, but the riffs missed the mark for me. It's hard to specify exactly why, I just didn't find myself raging to any of them. But the potential is enormous here, so I hope to hear more.