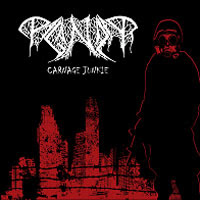 After a few delays we've finally got the new Paganizer album, their first full length release since 2004's No Divine Rapture. Though this album didn't quite live up to my expectations, it's still quite good, and aside from the dozen new songs up for offer, there are a number of bonus tracks. Also, expectations are like assholes, we've all got them. And I am definitely an asshole.

The album begins with "Death Plain and Simple", which is an adequate description of not only this song, but the entire album. It's still mired in that roots Swedish death metal of bands like Grave. I thought the song was pretty mediocre, but already the 2nd track "Among the Unknowing Dead" is an improvement, with a lot of raw energy. Other worthy tracks on the album are "Just Here Rotting", "Heal Not Your Wounds", "Carnage Junkie", "Mummified Alive" and "The Rope Tightens". This is a band who plug in and deliver to you everything the death metal maven appreciated about the early 90s Swedish scene. Evil rhythms and aggressive, meaty sound.

There is just no questioning Rogga's love for this sound: Carve, Ribspreader, Deranged, Edge of Sanity, Demiurg, Those Who Bring the Torture, and Putrevore!? That's quite a resume, and the man is basically Swedish death incarnate. Carnage Junkie is another notch in his belt, a worthwhile album, but lacks some of the vitality of previous Paganizer albums like Murder Death Kill or the amazing Dead Unburied. Still, as a large fan of this guy's bands I'm sure I'll be spinning it some more. There are a half dozen tracks here to die for, pun intended.