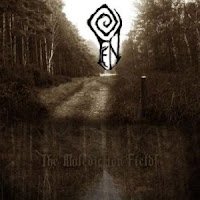 First, I should thank a fellow blogger for turning me on to this, otherwise it may have passed me by completely as I do not recall any exposure to their previous EP Ancient Sorrow. Fen is a great and apt name for this UK 4-piece, because the glorious, melodic black metal they conjure will submerge one like the murky and complex waters of some backwoods wetland it implies.

To describe their sound is to describe the very essence of atmosphere and sorrow, because few bands can conjure these in perfect conjunction within the black metal context. Not only do Fen excel, but they do so with a near mint mix and an onslaught of clean chorus like vocals, some acoustics and beautiful songwriting. "Exile's Journey" is an excellent opening track, conjuring directly to the front the band's heavier side with some beautiful blasted riffs under swelling ambient synthesizers. "A Witness to the Passing of Aeons" begins with a subversive, swampy vibe, some flute like sounds and creepy whispered rasp over a plodding bass line, almost as if a corpse were rising slowly to it from the depths of a peat bog, waterlogged and horrifically preserved by natural forces. "Colossal Voids" is a dreamlike post-rock segue which breaks into melodic shoegazing riffs under snarls. "As Buried Spirits Stir" is another glorious track with several captivating layers of subtle melody. "The Warren" is a delightful, bluesy and folkish piece which finally shifts into the driving black form near its climax. "Lashed by Storm" is the most black metal and 'epic' of its kind on the album, and "Bereft" is another haunting but melodic piece which ends the album much as it opened.

This is the very substance of a job well done, a lovingly crafted piece of atmospheric and sad black metal which should appeal to both the kvlt sects of the depressive, tortured style and the multitude of artsy, romantic black fans who adore bands like Lifelover or Agalloch. I'll go out on a limb and say it will also tickle the bearded and braided chins of the epic Viking/folk metal crowd. It's a phenomenal debut album deserving much time and attention, and there is nothing quite like it haunting the weed choked waterways and shadowed glens of the Isles of late.