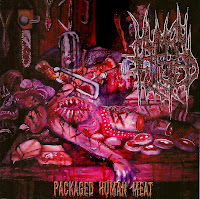 This is a short album recorded in 2005 which has recently seen release. It should be noted that the production is almost rehearsal quality, yet I kind of enjoyed it anyway. Human Filleted is a brutal death metal band from Indiana, and they have all the traits common in extreme USDM: highly guttural vocals, a LOT of chugging breakdown parts, and blasting. Fortunately, they write lots of good quality riffs which exhibit a truly old school death metal reminiscent of Cannibal Corpse, Malevolent Creation and Death.

All the songs have decent riffs, in particular I enjoyed "Partial Decapitation" and "Remembering How She Bled", which has an absolutely intense breakdown death metal riff. It's one of those riffs where you wish you had come up with it, it's so damn obvious and cool. The material is consistent throughout. So my main complaint here lies in the bass...it's just barely audible, and that may only be my imagination. Seriously, with a good bass sound and quality studio production, this would be excellent. As it stands, it sounds more like a live set or rehearsal demo. The band does have another, newer release Hideous Sculptures of the Dead, and having heard some of the tracks, it does sound quite a lot better.

When the smoke clears and freeze dry truck arrives, Packaged Human Meat is a short album with some decent, brutal death metal songs that would be far more effective if re-recorded. The band certainly has the chops and the material to impress gore metal fans, so I'm eager to hear other material. Two of the members of this band are also in Catatonic Atrocity, watch for a review of their debut soon on these pages.