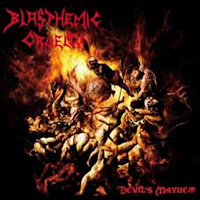 Looking for something to fill in the post-Angelcorpse void of US extreme death, black and thrash metal? Well, how about this new band featuring Gene Palubicki of Angelcorpse and some of the most barbaric female drumming on Earth?

Blasphemic Cruelty is a 3-piece out of Florida performing some of the most honest, crushing Satanic extremity I've heard all year. The riffing straddles the razor thin line between old school death metal and blackened Germanic thrashing, and the band is generally moving forward at one speed only: EXTREMELY FAST. This isn't an album about originality, it's about smashing sending you through the arch gates of Hell as quickly as possibly by repeatedly stabbing a cursed blade into your throat. It's also awesome, and I was particularly taken by tracks "Poisoned Lust", "Warstrike" and "Infernal Abominations" which are riff-tacular and insanely bombastic.

The album is delivered in an even mix. Skin shredding guitars, insane percussive blasting and Alex Blume's snarling black/thrash rasp vie for the infernal throne, but Blume's bass is likewise audible supporting the guitars. Lyrics and titles are pretty old school, true to the early Satanic spirit of the bands it pays tribute to. To keep this short, if you love Angelcorpse and miss their style, you totally want this. If you also like crazy Euro black/thrash bands like Desaster and Bestial Mockery, you also totally want this. It's a great debut album and hopefully Palubicki and crew keep this going.