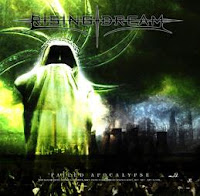 The debut album from Croatian Rising Dream is a crunchy affair of slow to mid-paced power metal with a lot of sweeping keyboards and some occasional growled vocals and snarls. Josip Ruic has a singing style which seems a more exaggerated and rugged version of Bruce Dickinson or Blaze Bayley, perhaps if they smoked a lot more and sounded like it.

This is the kind of power metal where the guitars usually do a mix of chugging and chords that accompany the keyboards, more so than the other way around. As a result, they don't do anything interest except for the rare case when the guitar and keyboard create a nice harmony. The heavier growl vocals do almost nothing to actually make the parts 'heavier', which I'm sure was the intent. The female vocals on "Dreams Come True" are both unnecessary and terrible.

Most of the songs are quite forgettable, but occasionally there was a catchy number, generally the instrumentals like the acoustic "Transcend", or "Voice of Gods" which is all growl vocals and sounds more like a melodic death tune. "Bird of Prey" is also quite decent. Other than that, there is very little I'd recommend here. I can't complain much for the mix, you can hear everything quite well and the bass playing is nice. The songwriting just isn't compelling enough to compare with much of the good power metal (even this slower variety) out there. I did enjoy the cover image and a few of the tracks, perhaps we'll hear more and better in the future. This isn't quite the Failed apocalypse of the title but it's close.