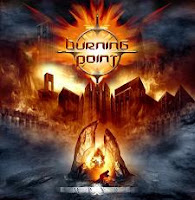 This is the fourth album from this Finnish power metal band, and they've got a very distinct, melodic sound. I've never been able to get into any of their previous material, and I'm not feeling this either.

The album certainly sounds great. It's crystalline and you can hear each instrument wonderfully. When the album gets heavier, as on "Face the Truth" which has a very Judas Priest/Primal Fear vibe, I even started to enjoy it. Unfortunately, there are just too many mediocre tracks here, like a few bluesy rock ballad types which I frankly wanted to skip. The band clearly has a hard rock/NWOBHM influence, which may not appeal to many of the melodic or power metal fans of the day. I personally thought this was a cool touch, just wish there were better songs written around it.

They do possess a powerful production with a lot of glorious atmosphere to it, and as I said earlier, they have a crystal tone. Pete Ahonen's vocals are decent if not impressive. His voice isn't so much the problem, it has some character to it, I just didn't find many of his chorus parts catchy. These guys have a cross history and have shared members with other Finnish bands like Ghost Machinery, Eternal Tears of Sorrow, National Napalm Syndicate and Kalmah. I found the album pretty average with very few standout moments; sadly not enough that I will want to return to it.