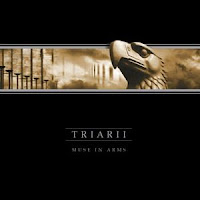 The third album from Christian Erdmann's Triarii is quite possibly one of the best of the martial/industrial/classical field I've heard to date, for the 11 tracks represent a nearly flawless execution of bombast, majesty and darkness.

The formula is not difficult to comprehend: repetitive cadence drumming, sweeping orchestral hits, bells and choirs, and samples of various historical figures. Rinse and repeat, ever upward and onward to glory. Triarii excels here in capturing these epic moments of purpose and allowing the listener to apply them to his or her own aural environment at will.

The album opens with "Birth of a Sun", which is an ambient track featuring some industrial sounds as well as the leering menace of choirs and echo of glorious keyboards. "Muse in Arms" follows, another piece built primarily of orchestral synthesizer and reverberating glories, but with the crash of a drum to drive it. "Europa" introduces heavier use of drumming as well as deep vocals which paint a poetic and dark image of Europe as an ascendant, final matriarch to its people. "Les Extremes se Touchent" is a bombard of imminent warfare, summoning to mind the "Mars" theme of composer Gustav Holst. Pick and choose from the rest of the tracks, because the entire album is a gratifying and consistent proof of concept, from the graceful sweep of "Sonnenwalzer" to the thunderous ambient of "The Final Legion".

An album that should appeal to any fan of the martial ambient, the ritual industrial, or simply excellent quality neo-classical fare. I'd also recommend it to any fan of orchestral film music, in particular films that involve historical or war themes. And, believe it or not, I'd recommend it to anyone who loved the early Mortiis albums, before he sucked. It has a similar feel if presented in greater glory here. At any rate, I've enjoyed this far more than anything Triarii released previously.