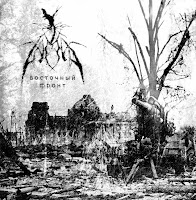 NSBM is a term I hate to sling about only because it creates an automatic division in metal listeners between the liberal PC metal fans and the more conservative, not to mention half the bands I've seen labeled this will later refute the claim. It's a damn shame that's the case, because there are many bands of this ideological sub-genre that release good albums that go unnoticed since their lyrics don't cater to the current political spectrum and its ravenous thought police.

In any rate, Vostochnyja Front is just such an album, a functional display of raw yet melodic black metal with a tasteful use of violin and keyboards, some thoughtful composition and a good pace. The songs tend towards an epic feel, like the opening title track, it has its heavier sections and then the more folk elements with violin. "Dushi Predkov" follows a mid paced winding verse but also breaks into some mellow restrained blast beats and very beautiful chord progression. Other great songs here include the vicious "Nalet Vraga", which is more of a straight black metal track, and "Mayhem of Funeral Death" which features some killer bass lines and thrash riffs. In fact, the band is capable of channeling thrash, classic metal and even some death metal into their song without flinching, and it only adds to their strength.

The mix is pretty simple, the drums are loud and clamorous, the vocals are right in the front, and the guitars are pretty fuzzy and savage, with the bass hanging in just right. Violins and keyboards also sound good when they appear, but the overall tone is lo-fi and suits this style well. I haven't had time to sit and translate through the lyrics so I can't comment on these, but I'm a huge fan of this native language and it sounds such a beautiful match with black or folk metal. This is a solid offering from Charza that fans of folk/black or NSBM would do well to check out.