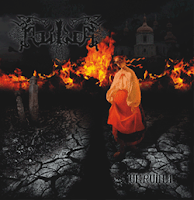 This is the debut from a youngish Ukrainian band who combine chunky death metal and melodic black metal into a competent whole. Fronted by the prolific Viterzgir (who has appeared in Kroda, Molphar, and Capitollium among others), they pummel through 10 solid if often average tracks.

"Fetters of Freedom" starts off with a clunky and forgettable riff, but the song improves once the more melodic black metal riffing initiates. There are also some folk guitars near the close of the track which are a nice touch. "The Tree of Kin is Rotting" begins as a folk death metal hybrid but then once again uses melodic black style in the verse. Other strong tracks on the album include "Without Fear and Death" and "Hacked and Crushed", but I found several of the other tunes lacking.

The album sounds nice and punchy, but the folk instruments meld in nicely and the vocals are set perfectly in the mix. The leads here were competent but not very interesting, adding little to their respective tracks except for the fact they exist. The tunes were a little inconsistent, I'd recommend about half the album overall. Still, the way they approach these styles is refreshing and doesn't ape off too many other bands, the black and death and folk blend nicely.