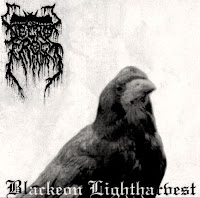 First off, this is among the worst album cover art I've ever seen. I expect a little more when you've got a great band name like Necrofrost and and album titled Blackeon Lightharvest. My irrelevant expectancies aside, Necrofrost is a band about keeping it simple.

Now, if I just stopped this here, asked you to look at the band's logo and tell me what they might remind you of, you'd be pretty close to the band's entire vilosophy. Simple, cold, and melodic black metal in the vein of earlier Darkthrone. And at this, they succeed, if marginally. Multiple of the tracks here have slightly different production, but this isn't necessarily a distraction. "Your Flesh is My Convenience" is a very depressing, sorrow filled song. "Sacral Arrival of Elitist Light" has a warmer tone to it, and I actually prefer this time of track from the Germans. "Steel Forest of My Deserted Dreams" is a far more abrasive track with some glorious, soaring melodies. "In the Cage" is an instrumental with some piano. "Ugly Misanthropic Metal" is a black metal bludgeon. "Journey of the Tyrants" is quite an epic and along with "Sacral Arrival of Elitist Light" one of the best tracks here. The album closes with a mellow instrumental piece.

This is their third album, I've not heard the earlier stuff but it's been some years since they released one. Production here is very boxy and raw, but like many releases of this type, it gives it a particular character it would not otherwise achieve. A few of the tracks are very good, but the rest leave much to be desired. I doubt I'll be tracking down their backlog, but if you are really into that grim style of simple and pure black metal, Necrofrost are not so bad.