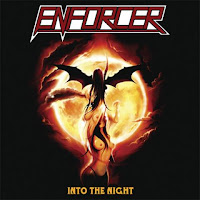 One has to accept a few details before hearing the debut from Sweden's Enforcer. 1) The band is unflinchingly old school, belonging firmly in the early to mid 80s with their brand of early speed/power metal with a thrash infusion. 2) Olof Wikstrand's vocals are high pitched, almost annoying and you aren't getting any apologies. 3) If you are perfectly willing to forget the past 20 years of metal music, this kicks ass and it was made for you.

Sure, the mix on the album is up to modern standards, but the songwriting is pure worship of a simpler time. This would all be worthless except that Enforcer are quite good at it. The musicians are extremely tight, literally several riffs per minute that are quality, and a killer rhythm section. Over it all are Olof's vocals which some might believe cheesy, but perfectly suit this style. He's also taken place in other old school Swedish bands like thrashers Oppression.

Most of the songs are pretty great, you've got rippers like "Mistress from Hell" and the title track, and ZERO FUCKING BALLADS. The band that this reminds me most of is earlier Rage, and that is only a good thing...right? Into the Night is a more than adequate good time if you adhere to the steps above, and proof that the old school, as silly as it might seem, still kicks major ass when given the treatment it deserves.