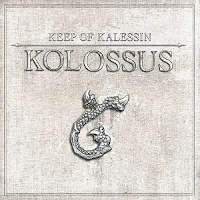 Keep of Kalessin have been around since 1993 but it wasn't until 2003 with the release of the Reclaim EP that anyone took notice of them. While Reclaim is a great Death/Black Metal hybrid featuring both Attila Csihar (vocals) and Frost (drums), the true (in my opinion) line-up of Keep of Kalessin didn't come about until 2006 when Thebon (vocals), Wizziac (Bass), Vyl (Drums) and founding member Obsidian C. (guitars) made Armada.

After the success of Armada it was hard to imagine how Keep of Kalessin could follow that album up, but after the release of Kolossus, it's not that hard.

The lyrics of the album continue the story from Armada which tell the story of how with the conquering king has decided to take on the Gods. These lyrics are once again sung by Thebon and he seems to have gained a wider vocal range than he did on Armada. It's not pure black metal screams, there are actually fairly few of those on the album, but the growling singing Thebon belts out is outstanding.

With this album Obsidian C. has added a few more progressive elements into the songs, a few slower sections with acoustic guitars and keyboards doing their thing, and a really neat acoustic intro to "Escape the Union". But his great technical guitar and compositional skills are still there, and they are still awesome. Obsidian C. has also kept up the level of production seen on Armada giving the album a crisp and clear sound that I prefer in my metal.

In the drumming department Vyl has blasted out some fast, precise, and powerful drum/blast that give this album it's biggest claim to being an actual black metal album. Wizziac provides the bass which is adequate but nothing stands out in my mind to make it anything but. [Note from Narian: "Since acquiring a new (read: good) sound system, I need to say that I was completely wrong. The bass on this album is mixed into the chaos formed by Obsidain's guitars and Vyl's drumming really nicely, and acts as a great backbone to the songs."]

Overall, I loved this album and I think that it is one of my favourite of 2008. Every song had something interesting, be it a riff, a section of singing/lyrics, or a beat from the drums, that kept me coming back again or again. Not to mention that I really love this unique style of black metal Keep of Kalessin have cultivated - fast, epic, good production and great varied vocals - and hearing that Obsidian C. and the guys had enough material written for another new album in 2009 has made me giddier than a prepubescent schoolgirl at a Backstreet Boys concert.

www.keepofkalessin.no/
Posted by Narian at 1:38 PM