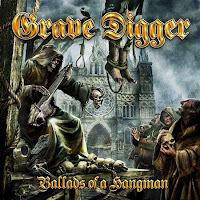 Proving yet again that they are one of the 'class acts' of European power metal, Grave Digger deliver another of their successful, historical concept albums in Ballads of a Hangman, a tour de force of catchy song-writing and gritty Boltendahl. It is easily the equal of any of the last few Grave Digger albums, in fact surpassing everything since The Grave Digger (which rocked). It turns out "Pray" (the first single which I reviewed earlier) isn't even one of the best songs.

The album opens with the grim chant "The Gallows Pole" which blossoms into the powerful title track, with its unforgettable vocal melody. "Hell of Disillusion" is pure classic Grave Digger, with a rocking German post-Priest power riff and some tasteful solo licks. "Sorrow of the Dead" reminded me of "Spirits of the Dead" in title, and it's another scorcher. "Grave of the Addicted" is a bold anthem with some kick ass riffing. "Lonely the Innocence Dies" opens with a sad string of melodies, you can really feel the doom of approaching that hangman on his scaffold to this. The rest of the album also rocks, with "The Shadow of Your Soul" being one of my favorites on the album.

The mix is once again fantastic, this band has been completely professional in that department for many years now. The songs here range from just great to perfect, it's pure heavy metal and the vocals of Kris have never sounded better. It's also very well paced, with enough rockers and a few slower pieces to break it up. Grave Digger is once again 'delivering the goods' like so many German power metal bands do, and this is a legacy far from over despite the graying age of the band members.