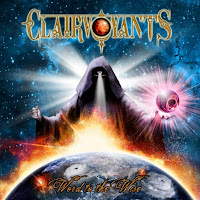 This is the evolution of an Iron Maiden cover band, and you can hear the heavy influence in the vocals and riffs (and obviously the band name), but regardless these Italians have whipped up a pretty good debut album of originals. Melodic power metal with a very classic appeal, also this is a guitar band, you won't hear orchestration on this.

The strength of the album lies in its melodic rockers, like the first track "Journey Through the Stars", an uplifting and upbeat song fueled by glistening melodic guitars over central NWOBHM influenced riffs. The guitars keep it simple but they select their chords well, the bass is really quite good and audible here in the mix too. Some of the other great tunes here include "The Lone" and "Sheer Hate". The band does have a lot of ballad-like fare, and I didn't enjoy it as much. For instance, the piano & vocal track "Closure", while peaceful, was a little boring. The album is closed by a cover of "Hallowed be Thy Name", which isn't bad.

I doubt Clairvoyants are going to create a large wave in the power/classic metal scene, but to their credit they deliver a well-mixed, slick sounding album with some good melodies and very obvious talent. This is a good album and I can definitely appreciate the bands like this that stick to their guitars rather than slathering everything in keyboards all the time. Italy has always had a strong scene of bands who play classic speed & power metal with no shame, and when it works, as it does on this debut, it's a pleasure to hear.