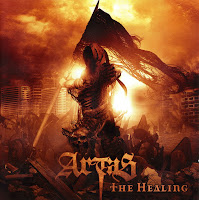 Artas is a new band performing a hybrid of melodic death and thrash metal with a lot of brutal, simplistic breakdowns which verge on metalcore but never quite arrive there (at least for me, personally). They've got a very pummeling sound, seeming as if were made perfect for the European mosh pit audiences. I'm also kind of surprised this is on Napalm Records, they seem to be branching out lately with some other styles than their black/gothic/avant-garde metal roots.

Unfortunately I couldn't get very deep into this album. At times the melodic death elements are quite glorious and remind me of bands like Amon Amarth, they also use some pretty cool vocals and layer in some melodic backup vocals which does tend to work. The downside is the sheer amount of breakdowns that do very little for me as far as my attention. The band is clearly at their best when raging out on faster tracks like "Bastardo" or "The Healing". I don't have the lyrics to the album, but from the titles like "Barbossa" and "A Song of Ice and Fire" they seem to be into some genre stuff. Then again, other titles lead me to believe otherwise.

The production on the album is killer: the guitars are chunky, the bass is quite audible and the vocals really stand out. The band's style overall is a bit original, it doesn't confirm strictly to thrash or death metal or even metalcore, just an aggressive medium. The bottom line is just that, beyond the occasional standout riff, many of the songs did nothing for me.