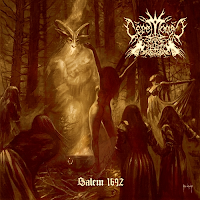 I don't usually think of lofi symphonic black/death metal when I think of Washington, but Ceremonial Castings are out to change that. This is their sixth album in as many years, and, while I'm not too familiar with the previous releases (although I vaguely remember disliking them at one point), it seems as if they've come into their own with Salem 1692.

Lofi, eh? While they do have a stark, biting production, that was actually more in reference to their choice of synths. Rather than going the lush Dimmu route like just about every symphonic black metal band ever, these blokes opted for a very unpolished, simple approach with their keys. I really have to commend them for their choice on this matter, as they picked some absolutely cool sounds. Some of the synths actually made me think of Metroid Prime and Ocarina of Time, and it totally works. As for the rest of the music, Ceremonial Castings play a brutal, punishing form of black metal. The album is rather harsh and invigorating. While some of the riffs are a bit on the plain side, they generally keep up a solid front, sometimes (although not enough) even breaking into pretty rad technical sections.

I have one problem with this album, however - most of the vocals are rubbish. The black metal screeches just don't blend in with the music on most of the songs. He gets it right some of the time, for sure, but the style he uses the most is far too grating. Also, the female vocals that come in every now and then are just bad. They take a decent approach with these, but whoever did them just doesn't have it down. It really doesn't help when they put in pretty damn good male choirs on "Damned Be Those of the Craft," either.

There's a lot of good to be found on this album, especially if you're willing to overlook some poorly done vocal sections. I could see this band putting out something amazing in the near future.

http://www.myspace.com/ceremonialcastings
Posted by is this your life? at 9:07 AM