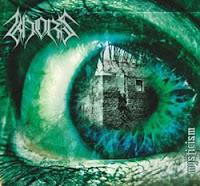 While their previous album Cold was a promising if forgettable work of Ukrainian black metal, the third album Mysticism is eloquent and atmospheric. Their style here would probably be better described as gothic black and doom, especially with the heavy presence of the whispered vocals and slight synthesizer touches. There are also a lot of acoustic guitars. It comes together well, though, so if you're in the market for something rather mellow to listen to, Mysticism is a pretty dreamy trip of an album, without losing the crushing black vocals and slower black/doom riffs.

A peaceful instrumental "Through the Rays of Fading Moon" is your first flight, followed by steadily paced "Raven's Dance", which immerses one into their somber and graceful style of soaring melodies and simple black rhythms. "Milk of Heavens" is a very gothic song with some whispered vocals. "Winterfall" is a nice, layered, melodic escape. "In the Cold Embrace of Mist" just might be my favorite here, an epic and sad track that balances their aggressive side nicely with the gothic landscapes they devour. "Pagan Scars" is an acoustic piece with some flute. The title track is another epic, and another of its best songs. The album ends with "Red Mirrors", a graceful gothic/black metal tapestry.

If you're into the mellow end of the black metal spectrum, with a folk influence, this is certainly an album you should give a chance. I think doom fans might also find a lot to enjoy, in particular gothic doom or folk doom. I'll also recommend to fans of Tiamat or Moonspell. It's not an entirely memorable album, but it WILL take you on a journey, if you just sit down, listen, and let it.