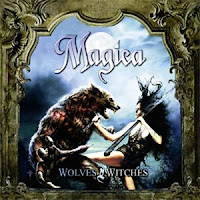 It's no secret that I despise a great deal of the female fronted metal band explosion of past decade, the endless parade of shallow Nightwish clones is both trendy and tasteless. Now, to preemptively silence unfounded cries of 'sexism' , this has NOTHING to do with some belief that female vocals and metal do not go well together. In fact, in many cases, they go together extremely well. I'd love to hear a good female vocalist just as much as any good male vocalist. But it seems after the success of a few bands (Nightwish, Lacuna Coil, etc), thousands more have suddenly sprouted up with the hack female vocals, which might be 'in key', but simply cannot do the supporting music justice (or vice versa). Magica is such a band, and they're not exactly newcomers.

Wolves & Witches (give me a break) is the 4th album from these Romanians, and they seem pre-occupied with romantic horror/fantasy novels or crappy fashionista vampire films like Underworld or Blood & Chocolate which have all the substance of a strip mall manicure. It's possible the entire album is a concept based around a particular novel, film or original story, but I concede that my knowledge of the romance/horror genre is lacking. The music here consists of some straightforward melodic/power metal smothered in Ana's 'angelic' voice, which is sadly very monotone and lacks much expression and power. Frankly, it's fucking annoying, not for the accent, but for the needless layering and the fact that it sounds so separate from the music. She doesn't have the operatic hooks of a Tarja Turunen, but she meanders along with the same dreadful pitch. The lyrics seem to be a smorgasboard of other previous fantasy power metal stereotype lines with a gothic/vampire/werewolf theme, they come across completely goofy and I actually found myself laughing out loud numerous times, take a listen to "Just for Two Coins" for example.

The riffs might not be all that bad under a different set of vocals, but they're not very good of their own accord. These guys can play their instruments. They can shred. But what develops is a very light and feathery, average melodic European power metal. "Chitaroptera", an instrumental, is the most tolerable track I heard here. Actually, it's not just tolerable, it's decent.
But try as I might, I cannot find another silver lining on this album. This is the fairy bubblegum pop metal I can't recommend to anyone outside of people who read Laurell K. Hamilton novels or went to see that movie Twilight and then actually obsessed about how hot those guys were afterwards.

Stick a silver fork in me. I am done.

Verdict: Fail [3/10] (listen to Darkthrone, you can thank me later)

Submitted for your further review:

Some of the worst lyrics I have ever seen in my entire life.

That was one of the lines at which I laughed out loud.