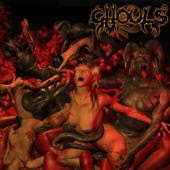 Although I wouldn't place it amidst the top crop of death metal albums this year, I was mildly impressed by this debut from Italy's Ghouls, because it's a refreshing take on the genre as original as it is brutal. The band is technical in a subtle way, in particular the excellent bass playing of Stefano Franceschini which is practically at a frenetic pace akin to Steve DiGiorgio (Sadus, etc). The rest of the band is just as competent, and the guitars are mixed with a punchy sound that adequately conveys both their brutal chopping and hints of melody.

"Menstrual Vaginal Cry" begins with its frantic blasting and winding wall of riffs, often accompanied by lascivious and tormenting sounds of female pain and pleasure. "Endless Pleasure" continues this trend of horrific lyrical sexual deviance with the crisp plucked death metal riffing and the unhinged flying of the bass and insane blast beats of Claudio Testini. "To Bitch or Not to Bitch" and the rest also cast a similar shadow here, it's a consistent and fluid album which makes it difficult to pick out particular strong points. The lyrics throughout are charged with sadism, sexual torture and voyeuristic murder. In other words, an appropriately disgusting death metal album.

Though there are no 'killer' songs here as far as being memorable, this is a solid and worthy debut album from a band with a colorful spin on their genre, easily better than many heralded new albums or 'superbands' that have emerged this year, and it's well worth your attention if you are a fan of sick and sadistic death metal akin to Deicide, Vital Remains or even the crop of quality tech death coming out lately.