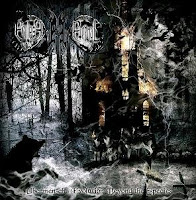 Canada's epic black metal hordes return to guide the wolves by fire and iron through the masses of weakling Christian sheep. This is the second full length from Eclipse Eternal, who dabble in the necromancy and Nietzsche of the human ego. Musically they exist on the heavier spectrum of 'symphonic' black metal. Atmospheric keyboards are used quite heavily but only to augment the barbaric rhythms and snarls. The result is quite powerful.

The sacrifice begins with "Nihilistic Contempt for Optimism", the sample of a girl speaking works quite nicely over their driving setup, which recalled some of the simpler symphonic stuff you might hear on In the Nightside Eclipse or Stormblast. "The Dragon Has Come to Blot Out the Stars" is not just an awesome song title, but a pretty menacing song overall. Other highlights include "A Knife to the Throat of Life" with its savage slower thrash riff opening eclipsing into keyboards and growls. "7 Billion Dead and Hung" is ominous with its atmospheric intro, building percussion and then the inevitable black metal explosion. "Into Black Abyss" is another dark delight, and it has some nice piano work.

This isn't the most original band, and to be honest they don't come up with a great many catchy riffs. But they carry this style well, the sound of the crunching guitars and synthesizers dominate while the barbaric drumming echoes about, it truly sounds like the cover of the album looks. I like the nihilistic philosophical approach to black metal, and I like that it is paired up with such an 'epic' and symphonic feel. I'd hate to compare them to bands like Dimmu Borgir because they're not quite as technical, but I did feel some vibes of earlier Dimmu as well as the above mentioned Emperor. Ubermensch is a good album, and quite entertaining, if not perfect, and I'd recommend it to fans of symphonic black metal without the excess gothic cheese. For as atmospheric as it is, the album IS in fact 'grim', the highest compliment one can attain.