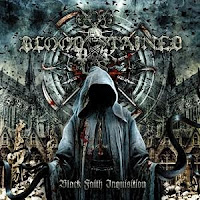 I'm not typically a huge fan of USBM, but there have of course been exceptions like Leviathan and a few of the Xasthur records that have blown me away and my perception of what we are capable of in a genre I tend to associate with a primarily European stamp of quality. Blood Stained Dusk is not going to change this for myself, but what they offer here is a competent album of atmospheric black metal with some gothic elements.

This being their third album, it really harkens back to the mid to late 90s when bands would mesh the sweeping gothic keyboards into a pretty straightforward, savage black metal snarl with blast beats and driving guitars. I reminisced of very early Moonspell or Cradle of Filth. There are certain tracks on this album that are of noticeably better quality than others. For example, I thought "Of Wolf's Blood" was a bore, but "Astrum Obscurum" was a decent track. I especially like that obvious nod to Bathory in the latter.

The mix here on the album is okay, I do feel like the leads and a few of the guitar rhythms are too weak sounding. The drums are fast and energetic but the sound gets lost, I feel like it's on a different wavelength and doesn't always agree with the rest of the instrumentation (the sound, not the beats themselves). The vocals are pretty well done here, they sound appropriately vile and very up front to the record. I also like the narrative/ritual bits, and they have a nice eye for cover art.

Not a lot more I can say. Few of the songs on this album were able to catch my attention, but if you're enamored with the gothic-tinged black metal of the late 20th century (Ancient, Cradle of Filth, old Moonspell, etc), you may get a lot more out of this than I did.