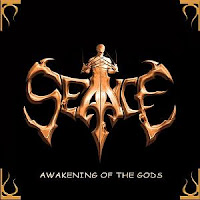 Well, this is a band I didn't think I was ever going to hear from again...Sweden's Seance released two pretty cult death metal albums Fornever Laid to Rest and Saltrubbed Eyes in the early 90s which garnered them a bit of acclaim, but most of the members are better known for other bands they've been in. Do Satanic Slaughter and Witchery ring any bells?

So not only do we have a brand spanking new Seance album, but it's actually quite good...in fact, it's probably their best yet. This is pure old school death metal but it has a nice blend of both the US brutal and Scandinavian styles, and Johan Larsson's vocals have a refreshing feel to them. The entire album sounds crisp, with excellent tone.

The energetic, grinding "Wasted" kicks off the album with an energetic slew of riffs. The baton is passed to the floor punching "They" and the the infectious "Your Time Has Come" with its old school death metal love. Other winners are the thrashing "Invocation", the maddening bass solo "Flight of the Wicked", and the melodic yet relentless "Murder". The entire album is a breath of fresh if rotting air...from beyond the grave. If you're into earlier Swedish death metal like Grave or....err...Seance! Then you should check this out.