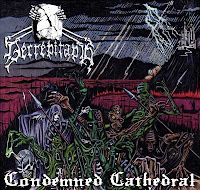 Razorback has always had an excellent ear for releasing killer, fun old school death and grind metal. Texans Decrepitaph are no exception to that rule, and while I can't hold this record in such high regard as I would hold other Razorback bands like Ghoul, Frightmare, Crypticus, etc, it's a good time. And this good time is achieved through a delightful simplicity. 100% old school brutal death metal which sounds like it could have come out in 1987.

After a nice sample, "Possessed by Blasphemy" arrives with a wall of Satanic gore. Sludging, punching guitars performing the most simplest of rhythms to the plodding drums. The vocals are primarily guttural, but you can hear some of the snarlier vocals layered in there. "Unholy Crucifixion" is just fucking savage, you have to love that distorted tone on the guitars and bass, and once again, the absolutely lack of pretention, the utter simplicity to what they are doing. The album is quite consistent, but some tracks I'd pick out are "Morbid Ritual", "The Labyrinth of Bones", and the closer "Crawling Out from the Crypt" with its crushing doomy guitars.

This album isn't going to appeal to everyone. In particular, there is nothing remotely technical about it, the band isn't playing a million miles an hour. This may turn off younger death metal fans with a severe case of ADD, but if you remember the early days of Death, Hellhammer, Possessed, and their ilk, and long for bands that can take death metal by its roots and seed an entirely new forest of gore, then Razorback has delivered yet another band you will enjoy.

I really liked the tone of this album, but the songs didn't make me want to go back to it. Great sound, no argument there.