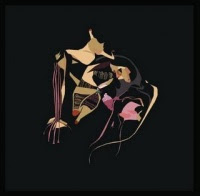 There is an entire scene out there to appreciate this spastic hybrid whirlwind of grind and death metal, but I've never really counted myself a part of it. For myself, the onus of the more complex end of the extreme metal spectrum lies in creating songs that I want to re-listen to for their structure and emotional impact, not just because of the mile-a-minute marathon of discordant, jarring notes.

Tangaroa is a technically adept band, and while not on the level of insanity of something like, say, Psyopus, they know their theory and deliver a hyperactive assault of maze like riffing, suffused between the realms of grind, thrash and crazier dissonant metalcore. Occasionally, this can be quite catchy. I thought the title track, "Swimming in the Sea", and the mellow post-metal of "Jupiter Sheep Farm" were all catchy and memorable, featuring diverse and well composed riffs. But there are other tracks I wasn't so enamored with, the more spastic fare like "Turn Off the TV, Shut the Magazine" and "Tick Tock Tick Tock".

The album sounds quite nice, the guitars and bass have excellent tone and are easy to read through the complex riffs. These guys are a lot better than many similar acts I've heard, focused on the devastation. Only a few of the songs here are actually annoying or spastic enough not to re-visit. However, if you're a less picky fan of this underground, technical death/grind/core scene, Tangaroa is a band worth the attention.