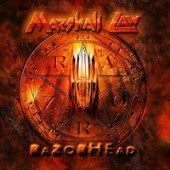 British power/speed metal veterans Marshall Law are another of those bands who have been sticking it out since the late 80s, having endured a hiatus and a dying and now revitalized metal scene. Personally, I'm glad they've stuck to their guns, because Razorhead is an excellent 4th album, and with 15 tracks, it's also quite a value.

The formula is simple: phenomenal, catchy riffing and well-crafted lead work highlighted by the charismatic and cutting vocals of Andy Pyke. Though the band bears more in common with 80s style speed/thrash and melody than the more pompous anthems of modern power metal, I believe fans of both will find a lot to enjoy here. After "The Summoning" intro, the title track blazes forward, with a catchy gang shout chorus and some nice clean choral vocal touches. I also like the keyboards used here, they function as pure atmosphere. "Premonition" is another excellent tune, with catchy guitar melodies opening into a salvo of memorable thrash riffing under Pyke's wonderful tone. There are a number of slower-paced, groovier thrashing tunes on the album like "Head Trap", but they are just as catchy and also reminiscent of the late 80s where classic genres like thrash and power metal were often indistinguishable. "Gods of Deception" is an excellent, slower track which once again is introduced with infectious guitar lead melodies. The album is just littered with these.

I could go through this entire affair track by track, but I think you've gotten the point. The tones of the album are captured well...a crisp production which should appeal to the modern audience but has all the nostalgic ambiance of the late 20th century. Song titles and lyrics are all pretty standard fare: "Blood Lines", "Hell on Earth", "Necromancer". The album is superb and it has rekindled my interested in their earlier work. If you are into melodic metal that isn't exceedingly complex or tongue in cheek, you should certainly acquire this! It is fantastic.