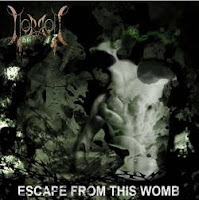 The French death metal scene continues to explode, showering us with giblets of gory delight. Morlok is a new band, this is their debut EP, and they produce a sickly style of brutal death which is not much like the more hook-laden style of many of their countrymen. It is, however, extremely guttural and feels like the exhumed, stinking corpse of old school death and grind.

The sound on this EP is really raw, and really deep. The guitars grind so low that it reminds me of Napalm Death around the year 1990. The riffs are total old school grinding evil mayhem, and that's really all there is to this. "Sleepless Suffering" and "Escape from this Womb" were the tracks I enjoyed most. They also do some nice intro/ambient pieces like "The Hells Fire Pit Descent".

It's not a great EP, but it's definitely the start of something. Unabashedly brutal, they may appeal to fans of the early death metal scene where the raw and fearsome reigned. I'm thinking of bands like Napalm Death, Repulsion, Incantation, Cyanide, old Sepultura, etc. The sound they create is truly repulsive and disgusting.