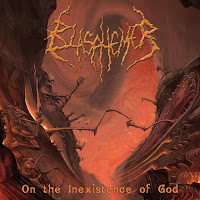 It's not often that I am happy to have a headache after listening to a death metal album, but this is one of those cases. Italy's Blasphemer have concocted a dizzying display of misanthropic carnage, 10 tracks of nutty brutal death metal.

The sound here is not uncommon, extremely tense and brutal with blinding riffs battering you in the face with a ballpeen hammer at any given second. This band is fucking FAST. The bass pops along like Bootsy Collins playing at a million notes per second, you can barely even comprehend what the fuck is going on until you settle into its hyperactive pace. The first offense is "Kuru - Laughing Death" which is aptly named since I feel like a pair of grim reapers are having a joint and looking down on me as i'm being torn limb from limb by some organic flesh pit of hell. "Compulsive Obliteration" must sum up exactly how Blasphemer felt when they decided to record this album, because there will certainly not be much left of any listener to use as forensic evidence. "IX Son" also slays, and then you get to...well, a little surprise to introduce "The Killing Dogma". I'll leave it there. The rest of the album is equally destructive, in particular I'd point out "Nihilist Preachers of Death" and "Dining Upon the Unburied" as choice executions.

Stylistically this doesn't diverge much from the rest of the hyper tense brutal death metal scene worldwide, but Blasphemer delivers so much bang for the buck that it's difficult not to become immediately immersed in the paranoid frenzy they create. The vocals are jesus fuck brutal, the instruments move along so fast that you can do little but feel horror as you bob your neck to each little nook and cranny among the labyrinth of notes they create. There may be a few weaker riffs amongst the plentitude here, but you will be so fucking scared you will barely notice. If you like that new Deeds of Flesh disc, or bands like Spawn of Possession, then check this out too.