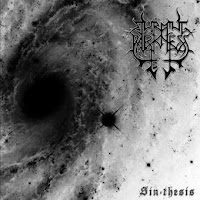 Desolate and haunting black metal from Russia, this is yet another impressive debut full-length I've heard of late. They've got a fairly straight approach to their style, yet the guitars create the perfect level of discord and sheen to create a real depth of darkness.

The album begins with the barbaric "V & R/Supreme Murdered Moral", a wasteland of thundering drums and dissonant, evil rhythms, furious and unforgiving. "Weaved of Worms" is a sinister, driving track, but with just a few shifts of bass and chords it takes on a cruel and wondrous atmosphere. "Awakening in Sin" begins with a killer old school black metal riff, somewhat melodic but still filthy. Other highlights of the album include the menacing "Black Night of Soul/Eschatological Hallucinations", the slow instrumental black/doom of "Necrofaith Song/Voiceless Decadence" and the ripping "Black Rapture and Furious Hunger of Darkness", which would be a good way to describe this whole album. Some of the dissonant riffing textures here almost struck me as a black metal Voivod.

I will warn that those outside the realm of black metal purism might find this album a tad monotonous, it does use a lot of similar blast pace in many of the songs, but then that is one of the reasons I enjoyed it. It's fast and hypnotic, a true black metal record in which one can lose oneself thinking of all the negative imagery it conjures. That it also has some great, subtle riffing textures is what catapults far beyond average. These guys are intelligent and know exactly what they're doing, they can immerse you with a simple twist of notes. The result is pretty devastating, perhaps not among the best of the year but certainly worth tracking down. An excellent debut.