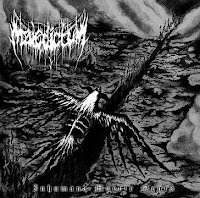 Some black metal albums are statements of sorrow and depression. Others are attempts to commune with the natural and forgotten world. Others still attempt to channel the faith of ancient ideals and cultures. But some, some are just completely fucking evil expressions of misanthropy.

The debut from Chile's Maledictum is just such an album, a savage and unforgiving assault on the listener with would probably burst the gates of Hell wide open if such gates were real things, just on the basis of the album having been conjured by human minds. Angels surely would weep blood if they heard this, virgins would suddenly cease to become virgins as the aural filth and impurity here prevent any possible virtue from existing. Arguably, this is the best kind of black metal album, since it can only be conceived through thoughts of sacrilege and hatred.

So...Inhumana Muerte Negra is a damned and damned good black metal album. Although I can't understand the customized Spanish tongue of the country, Misanthropo's hellish snarling communicates to be directly the dark deeds of his soul. The tracks are typically delivered at an extreme pace with buzzing guitar work and a storm of devilish drums. Some of my favorites on the album are "Crepusculo Ser", "Fuego Eterno" and "Suprema Vision de Purification". The sound is pretty lo-fi, but you can hear the tinny drumming quite well, the puking bass and the twisted guitars. Occasionally, the band will bust out some high pitched scream vocals akin to King Diamond. They are always at exactly the right time.

I may be condemning myself to Eternal Punishment with such a statement, but Maledictum rocks, and if you're in the mood for an onslaught to all good taste and sensibility, listen no further. I also recommend virgin blood and angel tears in that wine.