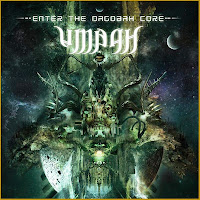 For whatever reason, my paths have never crossed with Umbah in the past. Unusual, since the project has produced a dozen albums to date, but we can't all hear everything, and I'm willing to bet most of these earlier works were small pressings, self-released with a limited audience in mind. If Enter the Dagobah Core is any indicator of their quality, then I admit I might have missed out, because not only is this a high strung, entertaining manifestation of cyber industrial death thrash, but comforting proof that there are human beings far stranger than I out there. The kind I typically tend to hang out with. The kind we could all benefit from. Now, autothrall is no square, but Enter the Dagobah Core is a humbling, eccentric experience which fuses the geek-chic of its creator into a harness of spatial, spastic, plastic and technical absurdity which gives the aesthetic impression of flying a TIE fighter into a Macarena party while huffing glue and gasoline.

I'm not exactly a stranger to Cal Scott, the project's sole member at present. Or rather, HE is no stranger to the scene. He once slung the six-string for the fairly enjoyable British death bangers Necrosanct, who produced a pair of sadly forgotten second tier gems in Incarnate (1992) and Desolate (1993) through Swedish imprint Black Mark Productions. However, aside from the fact that it flirts with the extreme side of the metal spectrum, Umbah, at least in this present state, has little to nothing in common with his alma mater. Enter the Dagobah Core is more like listening to Germans Mekong Delta while you're trying to perform speed runs of Mega Man, or a clusterfuck of Florida hybrids Atheist and Hellwitch with Devo. In fact, I don't think I've had so much fun with a cybernetic metal beatdown of this sort since Alf Svensson's Oxiplegatz. Or, more accurately, Gigantic Brain's Invasion Discography, but while that was more of an alien abduction grind outing, this is more like a man entirely off his meds, shredding and growling his way through some 16-bit future.

It's not total chipset video game death metal like the amazing Norrin Radd, so the guitars still play an important part of the picture. However, the architecture of the songs here is absolutely batshine insane. With "Whispers of a Dying Sun Part I" alone, the first three minutes of the CD, we've cycled through warbling, pulsing electronic noise to dissonant spikes of driving thrash, tense and complex electro freakouts, and even an EBM framework or two which would not have been out of place on a KMFDM record. Scott's vocals engage a wide, schizoid array of personas that range from the usual rasp or death grunt to a more Gothic, doped up edge redolent of The Kovenant or Marilyn Manson, to bursts of nasal paranoia or even pitch shifted narrative via Darth Vader. There are no rules to which he strictly adheres, and this creates a massive sandbox of personality through which he gets to explore through the lurching, chugging diatribes of "Cosmic Garland", Cannibal Corpse gone psycho-hyper-fuck of "Rackborn Skin Expulsion" or destructo dancer "Zombinods".

I swear, I heard such divergent voices here as an opera singer and a horse whinny. The entire 13 track progression of the album feels as if its almost always about to burst at the seams, succumb to its own energized clutter, but Scott hurls one interesting passage after another in your path, and I found myself unable to turn away from it. Each successive spin drowned me in the chaos, a whirlwind of electronic drumming and choppy, thrashing precision. There must be six thousand riffs on this thing, and while not all are incredibly distinct of their own volition, the rapid, surefire succession of their arrival is bound to drill itself into even the most A.D.D. addled cranium. On the flip side, this is not something you want to listen to if you're sporting a pacemaker. Or if you have epilepsy. A few songs are mildly calmer, like "Mad Zu Chong", but in general you're dealing with a strobe light of frenetic industrial trance excess.

It's not the perfect cure for a hangover headache, because admittedly the music is so frivolous and fun to the point that its own goofiness burdens the listener's ability to take it serious. Enter the Dagobah Core is too spurious, synthetic and ridiculous for its own good. Certified crazy. But then, that's rather the point of the thing. Subject matter ranges from the obvious Star Wars influence (the title track) to Germanic physicists ("Dr. Geiger") and Chinese astronomer-mathematicians ("Mad Zu Chong"), and you get the feeling this guy had as much a good time choosing them as you will have listening to them. I don't know just how wide an audience a record like this will find, but I'd recommend it to nearly anyone with the eroded mental health to appreciate it's flabbergasting charms, or anyone who might appreciate a Mr. Bungle remix of Illud Divinum Insanus which DIDN'T suck. Can you imagine that? Nerd on, motherfuckers.
Verdict: Win [7.5/10]
http://www.umbah.co.uk/
Posted by autothrall at 7:36 AM