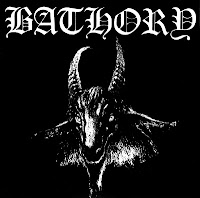 To calculate the actual sum of influence perpetuated by the 1984 Bathory debut might prove inestimable to even the keenest of logisticians, because it's seething tendrils pervade numerous niches of the metal spectrum even today. I can't tell you how many bands I hear annually, via promos or research, that would be entirely content if the whole of their careers amounted to little more than an aesthetic tribute to THIS very album. To exist as nothing other than a shadow of the late Quorthon. Is Bathory the first proper 'black metal' record as far as the fundamental principles we equate to the genre today, disregarding the titular ownership via Venom? I do believe that a strong case could be made for such, at least as good a case as for any other particular work.

Of course, when I was young, and first experienced the Swedes' music, it was considered thrash or speed/thrash metal of a darker pallor than some of the popular Bay Area sounds. People had yet to kick around the 'black metal' tag as a proper sub-genre, and other favored progenitors like Destruction, Sodom and Kreator were clearly performing at a similar, vicious viscosity to Bathory's scathing inauguration. And yet the iconic, minimalistic cover, the classicist font of the logo and the repulsive timbre of Quorthon's youthful snarling best represent, at the very least, the birth of European black metal in its filthier format. That's not to say that Bathory was wholly unique even for its day. Clearly there are parallels to Slayer's rapid, hellish origins ("Hades" reminds me of "Black Magic") and a grimy punk rocking glaze redolent of the more extreme NWOBHM related acts like Motörhead, Tank and Venom. The Satanic/occult focus of the lyrics was also also not news by this time, as it featured prominently for several of the aforementioned acts. However, the fact that this was arriving from a non-German or American act was indisputably eye awakening.

Bathory was not an easy find for me at first. I combed the local import record stores with decent metal sections on a near weekly basis for such gems, squandering my paper route money on whatever was readily available rather than paying double for special orders. If they ever had the damn thing in stock, it was always gone before I arrived. I had to settle for a dub off a friend's cassette for years, and in fact I had purchased hard copies of Bathory's later efforts like Under the Sign of the Black Mark and Blood Fire Death before finally landing my grubby mitts on it (ironically, the only two albums in Quorthon's entire lexicon that I favor over this). Bathory was not a highly visible band in my neck of the woods. You heard mention in interviews or magazines, you saw a few of your favorite metal musicians wearing the T-shirt in photo ops. Metalians in my high school were busy sporting erections for Metallica, Megadeth, Slayer, Anthrax, and most had very little attention span or funds to explore the thrash genre much deeper. If you encountered a guy or gal with a Testament or Nuclear Assault t-shirt other than yourself, you were blown over by the prospect of a kindred spirit. Meet your new best friend.

Funny, then, that of any of the 'second tier' of speed and thrash in the 80s, Bathory has left one of the most enduring and massive legacies. Few metal bands can match their aesthetic imprint count for count, and even some of the 'big' names owe Quorthon a beer in Hell. For example, you could lie to yourself and then try to convince me that Burzum's "War" was not a spiritual rehash of the track "Necromansy" (not Bathory's "War"). The riffing pattern is very similar. Or that Witchery's explosive black/thrash cut "The Reaper" was not an atavistic nod to this previous Swedish "Reaper", which has a decidedly familiar chorus. And what of the vocals in general? Cronos might have had a crude and carnal mean streak coursing through his pipes, and Schmier a more pinched and nasal wrath on Sentence of Death, but Quorthon's biting vitriol is like a musical Genghis Khan, its seed spread through countless tens of thousands corpse painted progeny who only rarely rival the fiber of their ancestor.

As far as its production qualities, Bathory was far from a highlight for '84. Glossier 'mainstream' efforts like Powerslave, Metal Heart, Defenders of the Faith or even Ride the Lightning proved that metal had come a long way from the toiletry of its demo years. And yet, Quorthon and Boss wrung out a primal and methodic sound here that too transcend into aesthetic immortality. Not as messy, raw and reductive as Venom's Black Metal, perhaps, but equally sinister. Stefan Larsson's drums have a thinner, backing tone that never intercedes over the concentrated acid of the guitars or the wretching diatribes of the front man, played largely in a punk rock fashion with loads of tinny cymbal crashes (though the supporting bass drums are noticeably thick). The bass of Rickard Bergman isn't dowsed in a load of bold distortion, but instead threads moodily below Quorthon's rhythms and leads; only rarely breaking away from the guitar progression, but where it does ("In Conspiracy with Satan", for one) it creates a warmer, morbidly glorious atmosphere.

But most importantly, Quorthon showed himself a relatively accomplished guitarist early on, and some of my favorite moments on this debut are when his frivolous leads tear off the rhythms in the bridge of a "Sacrifice" or the rocking "Raise the Dead". There is some degree of amateurish sloppiness in a few of the solos, or the riffing in general, but in general you'll be too hypnotized by the sheer cruelty and velocity. The song structures are relatively primal here, rarely featuring more than 2-3 riff variations, but none lack for a thriving infernal energy, and the brevity of the tracks average around 3 minutes never allows the listener's interest to wane. In fact, alongside Slayer's Reign in Blood, this is one of the best short playing thrash albums of the 80s, in and out faster than a desperate drunken tango with a prostitute. Slam, bam, thank you ma'am, the cash is on the dresser and I'll try not to trip on the sticky jeans around my ankles while I fly down the stairs. 27 minutes of sinful pleasure beget a lifetime of damnation.

It's not perfect. Personally, I find that the windswept, distant chanting and tolling of the "Storm of Damnation" intro could have been clipped in half to better swell the anticipatory momentum for the first metal track, "Hades". The outro could have been snipped entirely. A few of the later cuts like "War" and "Armageddon" never really hit me with an ace riff like the rest, though they are no less despotic and relentless than their neighbors. The lyrics are all appreciably extreme for the time, but some of them seem better ordered and paced than others, and certainly they provided fuel for a great number of faux Satanists and provided ample fuel for the genre's Christian right-wing antagonists. I always got the feeling that Quorthon was just doing the whole 'evil' thing for show, and that he never really had his heart in it, a notion that was enforced by Bathory's later switch almost exclusively to Norse/Viking themes. But, that said, who the hell WASN'T doing it for show? Maybe King Diamond and Cronos were serious about it at some point, but Tom Araya's a bleeding Christian.

You don't get a chance every day to formally review something that has left such an enormous impression upon such a huge chapter of your life in entertainment, and Bathory is clearly one of the cornerstones. Rolled out of the very depths of the abyss for your amusement. A ripping rout, unapologetic in its backlash towards the mainstream of heavy metal that was making headway at the time of its arrival. Some bands burned churches to make a name for themselves, but some, like this one, just burned your fucking ears off.
Verdict: Epic Win [9.25/10] (where the cold and darkness meet)
Posted by autothrall at 7:33 AM