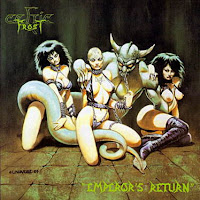 Snakes and ladies. When you get right down to it, they're the building block of civilizations. Morals. Faiths, or at least one faith. We might not all have lives blessed with the same caliber of coiled demons and chained, moppy headed (or bald) punk harlots who confront us from the cover of Celtic Frost's second EP, Emperor's Return, but I can't have been the only young teenager to have felt a strange seduction at the sight. Fortunately, this packs more than a mere penis pump, but a notable stride forward in the quality and style that were introduced through Hellhammer's Apocalyptic Raids and its direct precursor, the 1984 release Morbid Tales. Sharpened, polished, call it what you will, but Emperor's Return is responsible for at least one of the best cuts in this Swiss band's repertoire, and one of the grooviest, darkest hymns in all of 80s thrash.

Perhaps the writing here represents one of the most marginal evolutions in the Tom G. Warrior canon, for the riffing structure is not a far cry from previous tracks like "Return to the Eve" or "Procreation (Of the Wicked)". I found the production on these five tunes to sound less ruddy, though that strangely grisly and fulfilling guitar tone remains intact. Simple and effective chord sequences which rarely deviate from the band's prior curriculum, but they seem to bear a bolder sense of darkness, an inescapable and suffocating sense of being stuffed into a crypt where the dead dance by day and necromantic rituals and forsaken eros are performed by the few traces of moonlight that filter through the stone cracks of the ceiling. What I'm trying to express in such crowded and colorful hues is that Emperor's Return rocks: pretty much from the first notes of "Dethroned Emperor" to the faster paced speed/dirt of "Visual Aggression", you are getting your ass kicked.

"Circle of the Tyrants" is my favorite of this lot, and arguably the band's career highlight, fully cognizant of the punk and hardcore aesthetics that informed Frost's roots, with a percussive use of chorus to split the verses, and some of their most immense grooves, like the dark and potent riff that erupts about 1:40 into the tune. As usual, Tom G. Warrior places just the right amount of echo on his vocals so he seems to be drifting into your ears from the dust of decay, and there are also some garbled pitch shifted incantations here which add nicely to the context. "Morbid Tales" features a prominent, thudding bass courtesy of Martin Eric Ain, and another classic, unforgettable heavy palm mute in the verse riff, with some of Warrior's unmistakable rock star swagger in the 'ows' and 'yeahs' found therein. Reed St. Mark offers a more muscular double bass in the bridge of the track, and overall I'd consider the drums more consistent and rock solid than those of Morbid Tales, and Celtic Frost proves yet again why they're so influential upon the decades of extreme metal to follow.

The latter tracks on the EP like "Suicidal Winds" and "Visual Aggression" have always held a slightly less important place in my memory than the first three, though they've also got a more grimy interface and rely on some of the faster riffing that I wasn't always so thrilled with on the first EP. In a way, the grooves that often manifest in Frost tunes would not be so effective without a change up from this almost pure dirtcore momentum (the NY band Sheer Terror would later channel this into excellence on their classic LP Just Can't Hate Enough), but I just never found the note sequences to be so enduring. That said, both of the tunes are admittedly consistent in disposition to the forerunners, and they certainly don't break the 21 minutes of bludgeoning, grooving and driving momentum.

Hands down, Emperor's Return is the best of Celtic Frost's non full-length fare (unless you're experiencing it in conjunction with the first EP on the CD reissue), and the ramp up towards the band's most brilliant album. Normally it might lose a little luster in the fact that "Circle of the Tyrants" would also appear on To Mega Therion, but I honestly prefer this less atmospheric version for its earthly charms, and alongside "Dethroned Emperor" and "Morbid Tales" it belongs on any highlight reel of their stronger work. I also love the cover art, the immortal lyrics ("are you morbid?"), and the truly oblique atmosphere the band is able to evoke through the riffing and bare minimum of other effects: it feels tangibly, invariably evil, like the musings of a mummified despot who longs to slake his thirst on the sanguine essence of the world once more. Whether you've got an original tape or LP or picture disc or you're loving it up alongside its older sibling, it belongs wherever there is good taste. Blood and concubines optional.