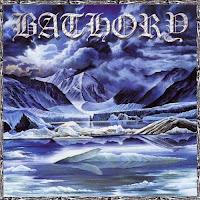 Released about 5 months after Nordland I, Bathory would not leave us waiting long for what was originally intended to be the second of four total chapters in the Nordland saga. Unfortunately, as we all now know, that would not turn out to be the case. Quorthon's tragic passing in the following year (2004) would retroactively establish Nordland II as the grand finale of one of the most important and influential legacies in all of metal. No pressure, right? Well, perhaps its not remotely fair to judge the record on such grounds, and I won't, but there is no escaping the fact that it often feels like a bunch of leftovers from the previous effort, or rather that he front loaded the content to the series and intended the garner interest on momentum alone with diminishing returns.

Not that Nordland II is necessarily a negative experience. In fact, I feel that tracks such as "Sea Wolf" and "Blooded Shore" create quite a cloud of nostalgia for the Hammerheart album, and I admire the grit he exhibits in his vocal performance here and elsewhere on this sequel. Slow, pendulous heavy metal hammer riffs drowned in choirs, synthesized organs and steady drums that create a dramatic subtext to the sailing, drawn out voices in the late bridge of "Sea Wolf". Chunky momentum and crashing chords dialed straight back to the late 80s glories. I also feel that some of the longer tracks like the 10 minute "The Messenger" (with that incredible, simple melody) and the 12 minute "The Wheel of Sun" with its leaden grooves and gleaming spikes of zephyr-like guitars, are far better at balancing their content and shifting necessary gears of composition thank some of the whales from the previous album.

There are also no crappy thrash tracks like there were on Destroyer of Worlds. The closest the record comes is "Flash of the Silverhammer" a mid-paced chugger which reminds me of the older, primal doom/thrash crunch of their countrymen Memory Garden, making decent use of the vocals to carry what otherwise might be a dullard. Like Nordland I, there's an 8 minute tune which makes good use of a propulsive, brutal into ("Death and Resurrection of a Northern Son"), but I don't exactly love this song, and along with other middling fare like "The Land" or the desolate "Vinland" I just feel like it treads on previous ground. With Hammerheart, Blood Fire Death, Twilight of the Gods, Blood on Ice and Nordland I already out in circulation, I got the impression of rinsing and repeating here, which I'm sure might have stretched out its welcome if the ensuing chapters were to manifest without significant deviations.

In the end, as usual, evaluation comes down to the songs. Some of their older albums had them in spades, but Nordland II doesn't really have much to recommend it unless you're obsessed with its stylistic and spiritual forebears and demand more of the same. I'll grant that there are a few epic climaxes here, and an atmosphere which sparks up fond memories for the influential storms Quorthon rode in on, but it's not an album I would choose over others in the canon. Let's face it: the guy more or less created two massive, enduring substrata of the extreme metal realm, and both within a brief span of years. About 13 years after that period, nothing innovative or really interesting had manifest from Bathory. But he had nothing more to prove, and so he resigned himself to small tweaks on the existing formula. I like the simplicity of the lyrics here, their dependable imagery and adherence to the atmosphere or the songwriting.

But where Blood Fire Death summoned up an eternal wrath from my soul, called my imagination to war forever, this album is more or less a pleasant fjord surfing experience with a few gut wrenching moments of anger. A functional successor to Nordland I, and not a regrettable experience, but not a source for much fascination.