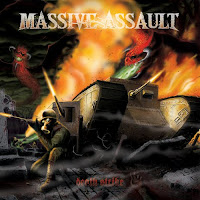 Massive Assault is another one of those outsider bands who truly draws upon the Swedish old school roots to the extent that their own nationality (Dutch) becomes moot. Death Strike transports its prospective audience straight back to the 1988-1990 period, when bands like Nihilist/Entombed, Carnage and Dismember were approaching liftoff with their early recordings, and creatively they do not deviate far from the path. Perhaps there is a stronger punk and hardcore influence circa Discharge than a Left Hand Path or Like an Ever Flowing Stream, certainly more than a lot of the comparable upstarts you'll hear these days, but vocally and structurally these guys stick with what works, both to their credit and detriment.

A thick coat of fuzz is applied to the guitars, sort of the Sunlight style beefed up, and it totally churns up the ear canals, working as intended. The vocals have a rather brute edge to them redolent of the usual suspects like L-G Petrov or Ola Lindgren, perhaps a bit less impressive in the range and timbre of their delivery, but efficient enough. As early as the first track, "Driven Towards Death", you get a real feel for that punk influence I had mentioned, especially in that melodic riff around 2:40 which a sliver of indie rock gleam, but this is of course balanced off with far rougher guitar progressions, in particular a nice, dense tremolo picked sequence threaded in the verses. Other tracks like "Cycle of Violence" and "Finished Sympathy" have some pretty sick breakdowns, the former in which the drums cut out to heighten the impact and tone of the main riff, and the latter more of a mosh fueled, slower groove that keeps on thrashing for the majority of the playtime. These are tempered with a few slower, crushers reminiscent of Obituary like "Dismal Life" or some straight shots of late 80s death like "Chained".

There is certainly a huge range of acts currently deployed in this field, and Massive Assault writes with a sense of confidence and competence comparable to many of their contemporaries, possibly with a marginal increase in variation. That said, the band isn't quite so dark, heavy and crushingly potent as what a Tormented or Miasmal brings to the game, and I'd place them more alongside Swedes Mr. Death in overall style, or perhaps Mordbrand and Brutally Deceased, two other European bands abroad inspired by those same root Swedish influences. Death Strike is a fun enough record for a few spins, and I dig the loyal adherence to the old guitar tone and pungent production, but ultimately I felt like it had no lasting effect, just another familiar carcass thrown upon an overstocked heap of bands seeking a similar fortune through a loyal adherence to and abuse of their influences. Didn't love it, but certainly didn't hate it.
Verdict: Indifference [6.75/10]