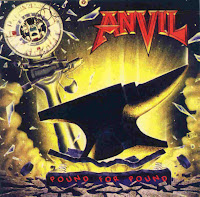 Strength of Steel might have churned Anvil to a halt as far as the band's linear progression in the 80s, but that doesn't mean that their later efforts were entirely void of individual distinctions. Take its 1988 successor, Pound for Pound for example, which draws upon all the ire and wrath that the Canadians previously hinted towards, and then dials it all up to 11. This is easily my favorite of their catalog to its day. To this day. A darker, volatile and dynamic effort which does not ignore the proto-thrash leanings the band exhibited through the early 80s output, and riff for riff their strongest in terms of branding itself to the memory. What bluesy hard rock influence remains here is delegated to a pair of brooding, doom laden crushers, and even the frivolous and silly sex songs are delivered with speed, passion and menace.

It helps that Pound for Pound also features my favorite Anvil track, and perhaps the greatest tribute to the sport of hockey in all of metal music. "Blood on the Ice" is a monster of hammering speed/thrash rhythms, eerie tapping melodies and dire, violent lyrics which celebrate the game's more entertaining, gladiatorial components. You'll note that Lips' vocals are honed in on a lower, grimier range which is the case for almost every song on the album, and I rather like the tactic as it helped gradate the band towards the more hostile climate of aggression that was popular in this period, without abandoning the manly, muscular heavy metal roots akin to Manowar. But the composition itself was just brutal for this band, every guitar lick incredibly well incorporated into this structure of blades, sticks and fisticuffs. I hail from the admittedly hockey saturated New England populace, and just 30-60 seconds of this track is all it takes me to wax nostalgically for the bleacher-based vertical mosh pits (complete with crowd surfing) that the restless jocks at my high school used to conduct much to the dismay of the rest of the town...

But then, just about every song on this album with the exception of the useless 14 second outro snippet "Cramps" is worthwhile. There are slower, thundering heavy/doom pieces like "Senile King" and "Corporate Preacher" that are bursting with screaming leads, arching rock grooves and some of Kudlow's tightest, glorious howling yet. Frenzied, memorable speed metal surges with Lips' tense screaming like "Brain Burn" and it's simply but gluey chorus, or "Machine Gun" which is one of the heaviest beatings this lot has ever meted out. It wouldn't be an Anvil record without a few smut anthems, and the orgiastic square dance of "Toe Jam" and condom praising "Safe Sex" fill that soggy purse here; yet both are fast, driving, and loaded with a fuck ton of riffs and lovable, noodling excess that make them seem almost too serious for their lyrics.

Another personal favorite here, second only to "Blood on the Ice" would be "Fire in the Night" a slower paced cut which I'd gladly place on the level of past transgressions like "Metal on Metal" and "Forged in Fire", though this is busier and far more pissed off, Lips often sounding like the great Savatage frontman Jon Oliva at his most furious. "Where Does All the Money Go?" might be my least favorite of the full-length cuts on this disc, with a lot of the 70s rocking swagger that populated their earlier work, but it's not at all bad and the guitars are a bit more complex than something like KISS (if not as catchy). And even here, Robb Reiner is bludgeoning along with enough force that he could likely cave in a human skull with a snare roll. No wonder the guy was probably sought out by a number of higher profile acts at the time, a real human steamroller who gives a lot more than any perceived, percussion indulgence might take away.

The leads should also get a mention: they're wild, dirty and not enormously catchy, but they add this sporadic layer to the pummeling rhythmic substrate which comes across like a molten steel bukkake jerking session. This was Dave Allison's last studio album with the band, and he makes it count as he and Kudlow exchange their shrill, shrieking fretted diatribes. I've heard some gripes about the production of Pound for Pound, and to be truthful I can hear how it might not be so smooth as Strength of Steel or Forged in Fire, yet I admire the tension it creates, the pools of shadow hiding beneath the darker note progressions and the faltering, stormy heights of the higher pitched screams where they appear. This is one hell of an album. Bad ass defined. Period. If 1988 hadn't been so overly choked with higher visibility records the likes of ...And Justice for All, Operation Mindcrime, So Far, So Good So What and Seventh Son for a Seventh Son, or an undercurrent of both US and European brilliance in the thrash genre, an effort like Pound for Pound might have gotten the attention it rightly deserved. But it's never too late, and if there's a single Anvil experience I could recommend over any other (excluding the documentary), this would be the one.