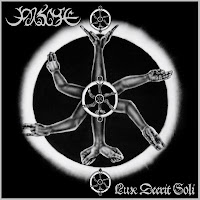 While I've not encountered these Italians previously in their native, creative environment Malasangre, I did run across their material as Caput LVIIIM on the Tribute to H.P. Lovecraft - Yogsothery - Gate 1: Chaosmogonic Ritual of Fear compilation released through I, Voidhanger. Presumably that collaboration led to further interest, and thus their relationship to the label continues here with the third full-length from their primary outlet: Lux Deerit Soli, an apocalyptic musing upon the end cycles of the Kali Yuga described in the Hindu scriptures, or more bluntly, the decline of human civilization. A two part concept recording which begs some comparisons to their work on the Lovecraft compilation, though a good deal of the psychedelic spaciness so compelling there has been dialed down to promote a drier, darker, and if possible, more desolate atmosphere.

Lux Deerit Soli is structured upon a sparse framework of down tuned chords set against an ambient periphery. The note progressions shift in slow gradations over time, but 'time' is also the greatest demand on the listener. Each of the album's halves is over 35 minutes in duration, yet neither incorporates a wide range of variation. At times, the compositions feel as if they were much shorter tunes stretched to slow motion, but then this is a common characteristic of its chosen niche. You're not just getting a lazy Sunn O))) exposée of brash, unwashed distortion left to simmer in its own vapor trails for 20+ minutes; but more of a Khanate, with a jilted, sadistic atmosphere manifest through the interplay of vocals, distant feedback, percussion and drudging chords. Malasangre creeps along with a purpose, an elderly arachnid with a serious limp, steadily if surely closing upon its prey, but monotony can set in pretty early, and patience can be tested without the appropriate mindset for the experience.

The 'black metal' element of Lux Deerit Soli is found solely in the vocals, a pure salacious rasp that hovers off just below the level of the rhythm guitar, asserting its presence through several drawn out, bloody, harrowing snarls. Dire vultures ready to pick at the entrails of the collective mankind once we've emptied each others' mortal vessels. A protracted, necrotic breeze of decay whispered over the viscera, often transformed into grisly mantras or chants drawn from the album's conceptual source text. Malasangre will also involve creepy acoustics, lucid patterns of 3-4 notes repeated off and on the crush of the droning chords (around the 10:00 mark in "Sa Ta"). The bass is another 'hovering' component, throbbing and monotone at the intro to the album but eventually curving into primal, lightly distorted patterns that rarely falter from the confident minimalism of the guitars. Drumming ranges from stock funereal doom beats to tribal breakdowns, but it's important not to take his myriad fills for granted: they are essential in alleviating the potential ennui of the riff patterns.

Bands of this sort often pride themselves on consistency, and surely the Italians can claim the same: the two halves of the album do not diverge greatly from one another. "Sa Ta" is the more morbid and dark of the pair, but it's also the less intriguing. "Na Ma" has a more fulfilling palette, with more titillating feedback applied to the denser guitar sequences and a lot of dour, plucky clean acoustics into which a din of whispered apocrypha is embedded. Both, however, embrace the agenda of suffering and illumination that Malasangre feeds upon. That said, I was unable to wrest a great deal of interest or enjoyment from this record. Not that such a souring, elongated spurn on the face of Creation is intended to evoke the latter sentiment, but I found the limited selection of notes and rhythms to be forgettable rather than hypnotic, moistureless as opposed to a wellspring of spirit leeching miasma.

The atmospheric ingredients of Lux Deerit Soli and the lyrical inspiration are fascinating, and go a long way towards curbing my reaction towards the positive, but ultimately I was parched for a fraction more dynamics than simply feeling dead inside. Respectable, certainly. Worthwhile as background noise when mood allows. Yet somehow void of that crucial, elusive, haunting fiber that makes a doom record blacken my skies for any significant duration.